Senior Champ McCorkle has earned a very prestigious honor not easily achieved by many high school seniors.  His hard work and dedication both on and off the court have earned him his latest honor–First Team Academic All State.  Champ is ranked at the top of his class with a 4.0.

The IBCA Academic All-State team is a program where academic prowess and athletic prowess both are considered in the selections. Items such as grade-point average, college board scores and academic class rank are considered along with athletic performance in areas such as points per game, rebounds per game and assists per game. 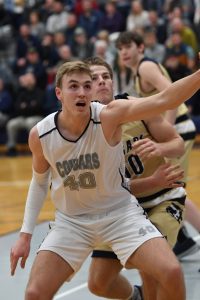